Mehl-bin; gregarious, bustling, and most importantly- at least in the eyes of local Melbournians- not restricted by Sydney’s contentious lock out laws. Unless you’re a particularly passionate supporter of one side in the Melbourne versus Sydney rivalry, there’s no reason you shouldn’t try and visit both during your time in Australia. Easily reached from Sydney via an hour and a half flight, check out Jet Star’s Friday Fare Frenzy or use comparison sites like Kayak to grab the best deal. Divided in to multiple distinct and diverse neighborhoods, from beachside St. Kilda to Fitzroy- Melbourne’s quirky home to an emerging young fashion and art scene-, the city is filled to the brim with a rich culture just waiting to be explored. Here are 7- of many- reasons why Melbourne’s worth at least a weekend getaway!

1. The Best Café Culture this side of Paris:

Australia’s coffee capital, Melbourne will spoil you rotten with the cafés on offer. Think the coffee’s good? It’s the stuff on the side that make Melbourne’s cafes even better (in my eyes at least)… Whether you’re going for breakfast or lunch, there’s no way the sweets and savory on offer won’t wet your appetite. Try out Rustica Canteen in the CBD or Rustica Sourdough in Fitzroy for breakfast/brunch with fresh baked breads and pastries. Make sure you leave space for the delectable cronut, a definite guilty pleasure. For quick coffee or a bite, stop at the shoebox, split level Flipboard Café, where the urban timber decor with built in booths provides the perfect place to sip on a flat white whilst watching city life pass by on the streets outside. For a menu that offers pretty much every breakfast favorite and then somehow makes the classics even better than they already were, Addict Food and Coffee– in café centric Fitzroy- is a must. What makes Melbourne’s café culture so unique? The city has no wasted street-side space, so you’ll find places tucked away along bustling roads in the CBD; take the time to explore because you’re bound to stumble across hidden spots that deliver big time!

You’re probably going to try and tell me that there’s no way restaurants count as a reason for visiting somewhere… But from one foodie to another, trust me they do! A multicultural hotspot, Melbourne’s young chefs seamlessly transfer the heritage of their grandparents- who hail from Greece to Vietnam and everywhere in between- in an ingenuously modern Aussie way. Chefs are branching out from their fine-dining niche and making high-end dining accessible in relaxed atmospheres, pushing food boundaries while they’re at it. With a fundamental on fresh and local produce, dining out in Melbourne offers world class food in a familiar environment where community tables and shared platters are everything. The locals know they have it good and take full advantage of the variety of food on offer, so making a reservation is more than advised. For a taste of what Melbourne has to offer, book a meal at George Calombaris’ GAZI, Bangkok dining hall inspired ChinChin, or Coda, where east meets west/Vietnamese meets European, right next door on the restaurant packed Flinders Lane.

Step in to any Melbourne bar and you’ll pick up on the meticulously curated theme, with attention paid to everything from the name of your cocktail to the vessel in which it is presented. With an active bar scene, Melbournians are spoilt for choice.. The best part? You’re unlikely to be told you can’t order what you want post midnight. Whilst I didn’t get round to checking all these out, here is a list of top spots tried and tested by myself and friends. For views of the city- that are low key yet incredible- offered from a rooftop bar that isn’t a pit stop on every tourists list, Naked for Satan in Fitzroy is the perfect answer. If you’re looking for the full shebang- from a fully kitted out old-fashioned science laboratory to cocktails served with booze filled syringes on the size- The Croft Institute is the place to go. For a little bit of fun, especially during the summer months, Madame Brussels promises to keep you entertained. Paying homage to Melbourne’s tennis heritage, this kitschy but cute locale takes afternoon garden parties to the next level on their parasol shaded terrace! 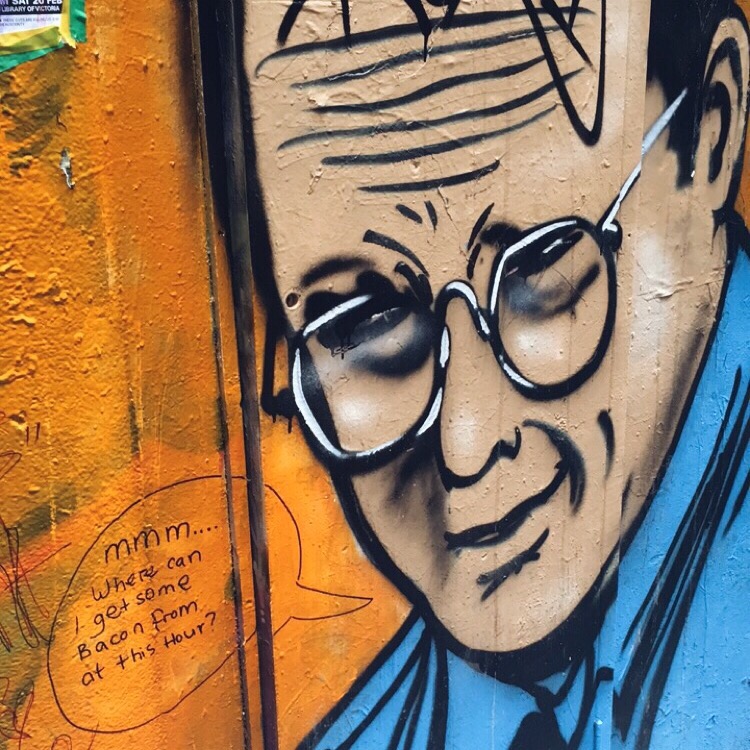 Before you get the wrong idea, Melbourne’s laneways and alleys are far from the dark, damp, and dangerous side roads you may be picturing. Instead, these small and previously under utilized spaces have allowed for the emergence of the unique street-side bar and restaurant culture in the middle of the city.  They’ve also created unique creative spaces, which have been transformed in to the urban canvases housing Melbourne’s eclectic street art. Stroll down most of the laneways off LaTrobe, Londsdale, Bourke and Collins Street in the CBD and you’re likely to stumble upon some curiosity or the other. If you’re after street art, head to Hosier Lane for the most ‘famous’ walls.. Stop at ACDC Lane a little further along Flinders, a tribute to a band you probably didn’t even realize was Australian. If you’re interested in the vibrant street art and do have the time, visit Blender Lane off Franklin Street, which doubles as the home of an experimental artists’ workshop and gallery- housed in a large warehouse at the end of the alley. This lesser known spot houses ‘historic’ and new pieces by some of the city’s more prominent artists come activists, with more creative pieces than the “tagging” (graffiti that is the artist’s name) seen at Hosier lane.

If you were thinking Melbourne’s all work no play, fear not. St. Kilda is the city’s seaside retreat, a beachfront town that delivers equally as good food and drink as the city does with the added bonus of being by the beach. Want to squeeze in that iconic photo by the beach huts? Walk the short distance along the beach front (or hop on the tram) to neighboring Brighton Beach, where the cute colorful huts are lined up along the sand. Afterwards, treat yourself- if you haven’t already given in to temptation walking past the tantalizing cloudy mega meringues on display in the multiple bakery windows along Acland Street– and indulge in gelato at Seven Apples Gelato… I’ve had my fair share of scoops and this one is worth the calories one hundred times over. Finish the day of strolling along the charming yet quirky streets with a visit to Luna Park. Although it was closed when I visited, Luna Park is Melbourne’s answer to Coney Island, a 100+ year old amusement park that has withheld the test of time.

Amongst its list of credentials, Melbourne totes itself as Australia’s home of fashion, highlighted by the annual Melbourne Fashion Festival, Australia’s answer to fashion week. If you’re looking to shop local up-and-coming designers and urban fashion, Fitzroy is your best bet. Dotted with co-operative style stores that display collections by multiple designers, take a walk along Brunswick Street and check out shops like Design A Space and Nique Keep an eye out for other little stores offering fashion steals, like everything in store for AUS $20 and under. If you’re looking for a cool Melbourne keepsake, stop at Das T-Shirt Automat, and watch as they print your picture or design on to a choice of item in an instant, creating a personalized one-off. The area is also full of homeware and lifestyle shops, filled with design inspiration, locally made products and fun knick-knacks.

Immense wealth as a result of Victoria’s gold boom in the 1800s lead to an accumulation of cultural wealth in the Melbourne, making it Australia’s culture capital. Culture vultures can feast on everything from the ornate Victorian architecture– highlighted by buildings including Parliament House and the Royal Exhibition Building- to endless art museums– check out the Australian Center for the Moving Image (ACMI) right next to Federation Square or cross the Yarra and head to the National Gallery of Victoria (NGV). If you’re visiting before before 24.04.2016, it’s definitely worth fitting the NGV’s Andy Warhol – Ai WeiWei exhibit, displaying +300 pieces that explore modern contemporary art with heavy social and political commentary. For something a little different, stop at the Queen Victoria Markets (check online for opening times so you’re not left disappointed) for a range of fresh foods, take-away street style food stalls, shops and artisan stalls.